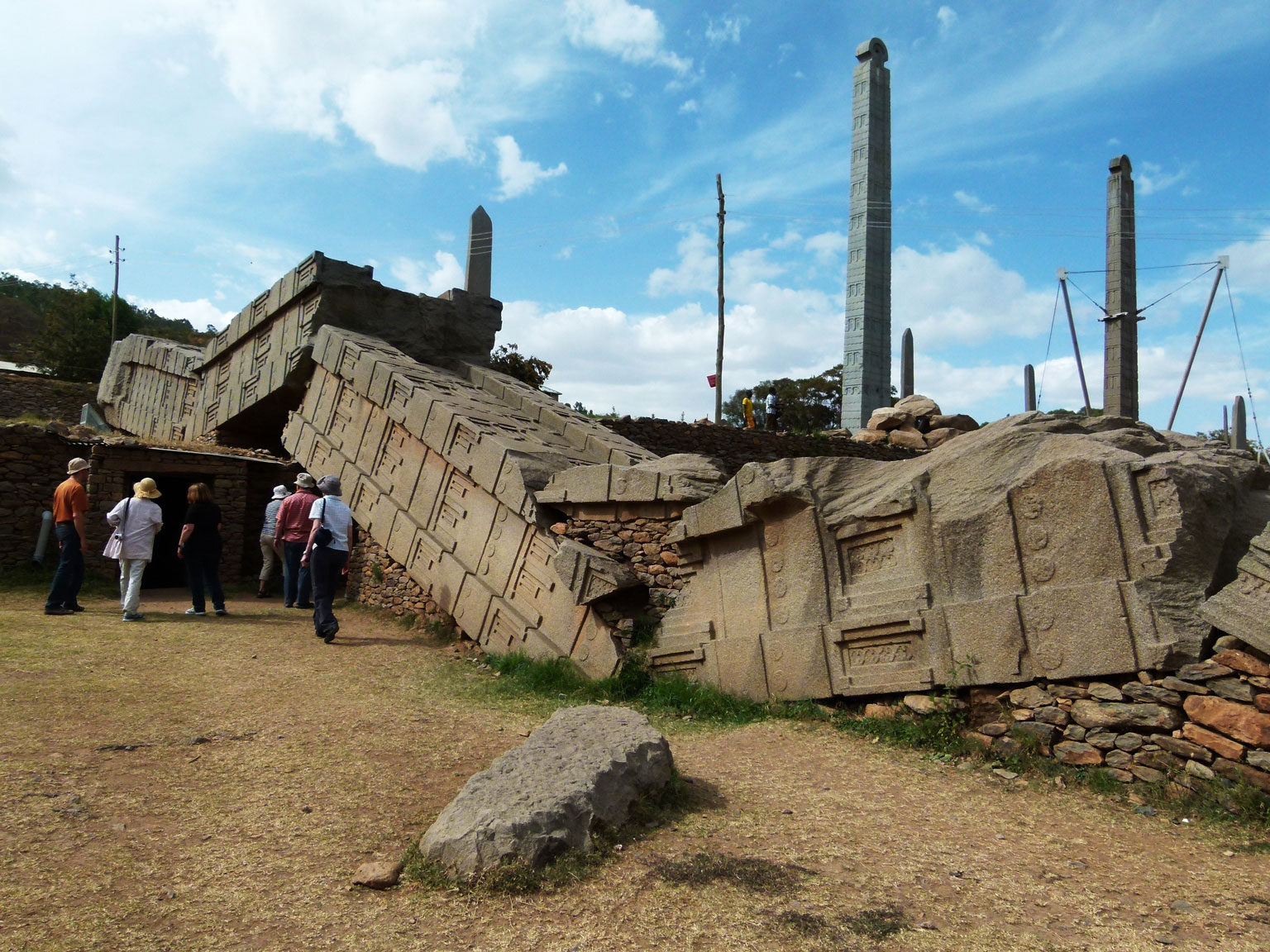 We start this part of our journey by taking the early morning flight to Bahir Dar.
Since 1991, the city on the edge of Lake Tanais the capital of the Amhara regions and is considered the most beautiful city in Ethiopia. We owe that to the palm-fringed streets.
In the morning, a boat trip on the largest lake in the country is on the itinerary. The lake is 84 km long, 66 km wide with an area of 3250 km2, about 6 times larger than the southern German Lake Constance. You go by boat to a church on one of the islands in Lake Tana. The interior walls of the monasteries are decorated with magnificent murals and in the sanctum of the round churches copies of “The ark of the covenant” are kept. The treasure house keeps precious icons, bibles, processional crosses and imperial crowns from the Middle Ages. The murals tell about the gospel. A certain knowledge of the Bible is an advantage …
After a nice lunch break we drive to the beautiful waterfalls of the Blue Nile, about 32 km to the TissIsat (locally known as the smoking Nile). The Blue Nile (Abay) is the longest river in the world at 6650 km. The source of the Blue Nile is in the North Western highlands of Ethiopia starting as the FelegeGhion, one of the four streams of paradise mentioned in Genesis (Genesis 2:13).  The river rises south of Lake Tana and flows from here into Sudan.  The river then flows through Sudan to Khartoum where the Blue Nile meets the White Nile, forming the Great Nile, which after flowing through Egypt finally discharges into the Mediterranean Sea.

After lunch you drive over vast pastures, fields and hilly mountains with innumerable farms to Gonder, 180 km asphalt road. On the way to Gonder we stop and see how the typical Ethiopian oldest cereal in the world, a dwarf hirsé, is cultivated on the fertile soil.
After lunch we visit the imperial city of Gonder, located 2200 meters above sea level. The city was founded in 1632 by the Emperor Fasilidas and for many decades was not only the capital, but also the centre of Ethiopian art, literature and science.
Gonder has another attraction, the Debre Berehan Selassie Church with one of the most beautiful murals in the country.

Excursion to the roof of Africa – Simien Mountain National Park
We start the day with a drive to Simien National Park. Half of its area is above 1200 meters, more than 25 % over 1800 meters and more than 5 % even reach heights of over 3500 meters!
The World Heritage National Park is home to countless animals, birds and plant species. Particularly impressive is the breath-taking scenery, it is unbelievably beautiful here. They make a little hike. The national park is the home of the unique Ethiopian ibexes Walya, the miniature bushbuck, the Ethiopian wolf and more than 22,000 endemic bloodbath baboons.
Overnight in Dibark or Simien Lodge with the highest bar in Africa, if not the world.

We drive through an extraordinary landscape with rugged mountain ranges and sparse Afro-alpine vegetation. From the high plateau we drive to the deep gorge of the Tekezze River, where you will find baobab trees and incense trees.
On the way we will visit a primary school and get to know the Ethiopian school system. We meet – hopefully – very friendly children. If you want to donate, please bring school supplies to the tour guide, which will be handed to the teacher. This is very expensive and valuable!
Please do not distribute gifts to children on the way, otherwise they will learn to beg !!!
In the evening you reach Axsum.

Day 6 Full day sightseeing in and around Axsum

The more than 2000 years old city of Axsum needs to be explored in detail. It was once the capital of one of the most powerful empires of its time, like the Persian and Roman. From the heyday of the Axumite empire also come the more than 33 m high monolithic grave stelae. Even before the Western European states, King Ezana introduced Christianity to Armenia in the 4th century and to Rome as the state religion. According to the Ethiopian tradition, the originals of Moses’ law book are preserved in St. Mary’s Church. The holy ark of the covenant was said to have been brought from the temple in Jerusalem to Axsum by King Menelik I, about 1000 years before Christ. Menelik was the first Ethiopian king, son of the Queen of Sheba and King Solomon. Ruins of earlier palaces with direct Sabaean or Yemenite influence, royal tombs, the “Bath of the Queen of Saba” and other historically interesting buildings will be admired on this day.

After breakfast we drive towards the Geralta mountains and once again marvel at the landscape. We visit the temple of Yeha from the 7th century BC with 12m high walls. We also stop for photo stop in the Adwabergen, where in 1896 the battle with the attacking Italians for Ethiopia took place victoriously. It was a victory for the Africans against the attacking Europeans who escaped colonization. This meets the Ethiopians to this day with pride.
The journey continues to the first monastery of the Ethiopian Orthodox religion, the monastery of Debre Damo. It was founded in the 6th century by Emperor GebreMeskel. The monastery is not accessible to women!
We reach our beautiful lodge and enjoy the view of the sandstone massif of Geralta.

There are more than 150 rock churches in Ethiopia, most of them in the Tigray region.
According to today’s knowledge of the rock church, the oldest churches of the Orthodox religion come from this area. They exist since the introduction of the faith by the kings Ezana and Saizana in the 4th century. The church of AberhawaAtsbeha was built during this time, when Christianity was declared a state religion. The church has been carved out of the upcoming sandstone. The trail might prove a little difficult, in which case we can adjust/change the program – although the magnificent views from the rock church over the surrounding landscape might be well worth the effort!
After the visit, the journey continues to Mekele, the capital city of the Tigray region since 1991. After a brief city tour we arrive at our hotel for the night.

Drive to unimaginable works of art, the eighth wonder of the world and world heritage, to Lalibela.
Before we arrive in Lalibela, we will visit the pre-Lalibela YimhranKerstos church.
The church stands in a rock overhang, protected by a new wall, which initially obstructs the view from the outside of the church. The YimhranKerstos church was built in the axsumite architectural style of a combination of stone and wood. The king reacts to the land from 1133 to 1172.
In addition to the usual sights that we offer them of course, we will visit a farming village as something special with you. This will be an unforgettable memory for you.

Day 10 Full day visit of the rock churches of Lalibela

The miracle Lalibela is since 1978 not only cultural heritage, but also the eighth wonder of the world!
At this place, formerly known as Roha, a new “African Jerusalem” was built in the midst of Christian Ethiopia surrounded by Islamic realms at 2500 m above sea level. The world-famous rock churches were built by King Lalibela in the late 12th and early 13th centuries. An architectural marvel completely carved out of the rock. Some churches are even monolithic. Today you visit the so-called “first group” of the eleven churches of Lalibela carved out of the raw rock:
BeteMedhanialem (World Savior Church), BeteMeskel (Cross Church), Bete Mariam, BeteDenegal (Church of the Virginity) and the twin church BeteSina (Church of the Sinai desert) and the adjoining, only for men accessible beet Golgota ( Church of Mount Golgota) also called the Bete Mikael with the Selassie Chapel.
In the afternoon we visit the remaining churches of Lalibela.  We visit the second group of churches comprising of the twin churches BeteGabreel and Bete Raphael (St. Gabriel and St. Raphael church), BeteMarquoreos (St. Markurios church), Bete Emanuel (Emanuels church) and Abba Libanos (Church of Saint Libano). We also visit what is considered the crown piece of all the churches, BeteGhiorghis (St Georges Church), which is located away from the two main groups.  This church was carved downwards out of solid rock in the form of a cross.

Noon flight from Lalibela to Addis Ababa. We will provide you with a day room to relax  until7pm at which time we are to invite you to a farewell dinner with folklore. Possibility to visit the Ethnological Museum.
Then transfer to the airport, or at least extend the journey in another direction?