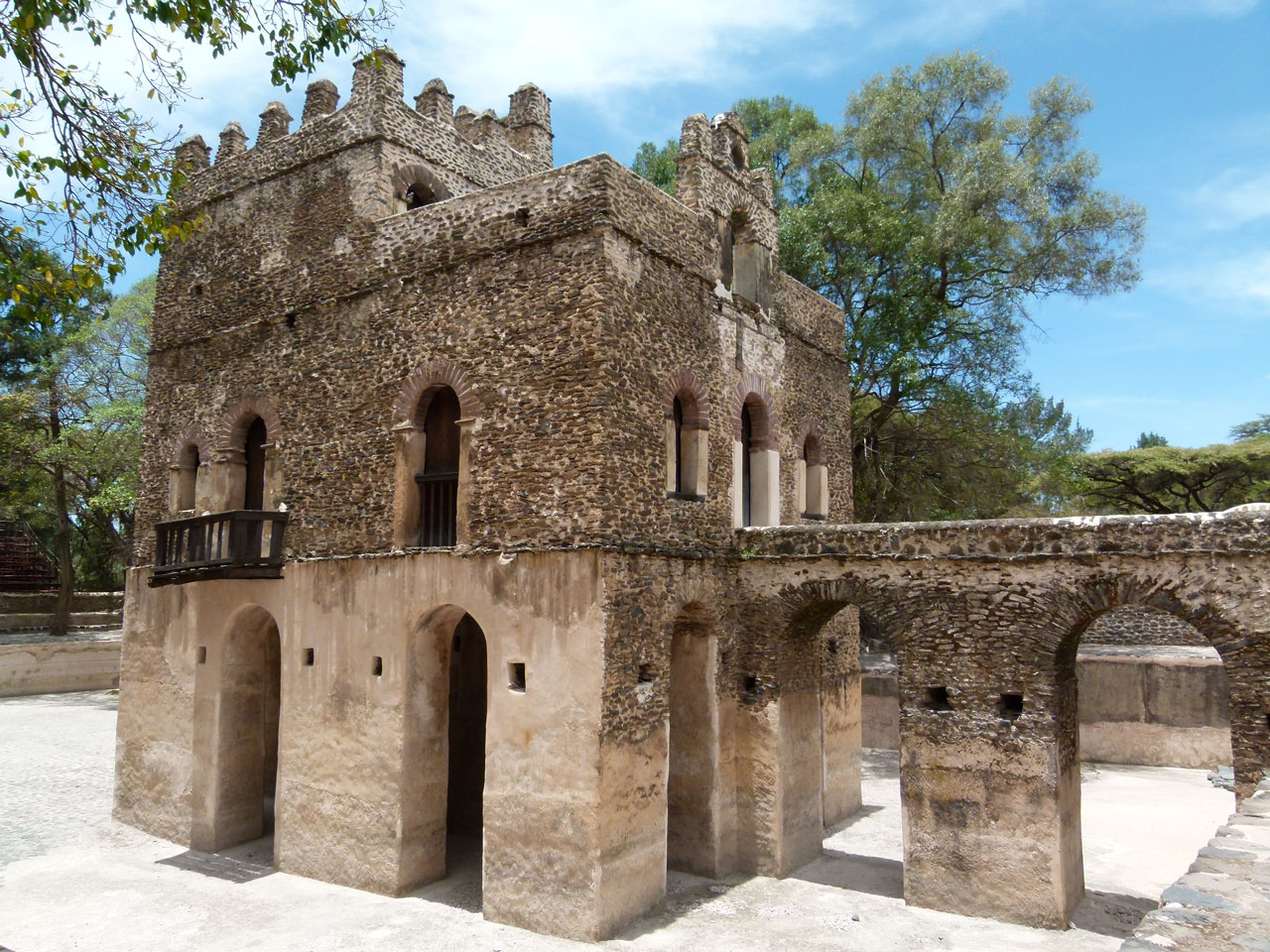 After breakfast we leave Addis Ababa early to travel north of Ethiopia through the largest region of Oromia to Bahir Dar.
On the way we stop at small towns like Dejen, Debre Markos, our high point today is the Blue Nile Canyon (1100 m), which has an excellent view and you can cross the world famous river by foot via the old bridge!
We continue through a changing landscape with views of teff-fields. Teff, the main dish of the country, is cultivated in this area mostly do to its fertile black earth.

1810m above sea level Bahir Dar has over 300 000 thousand inhabitants.
The capital city of the Amhara region since 1991, Bahir Dar, on the edge of Lake Tana is considered the most beautiful city in the country, thanks to its palm-fringed streets.
In the morning we take a boat trip on the largest lake of the country, 84 km long, 66 km wide with a surface of 3250km², and visit a monastery on one of the islands of the lake. The interior walls of the monasteries are decorated with magnificent murals and in the sanctum of the round churches the “copies of the ark of the covenant” are kept. In the treasury, precious icons, bibles, processional crosses and imperial crowns from the Middle Ages are kept. The wall paints a story about the evangelion.
After a nice lunch break we drive to the beautiful waterfalls of the Blue Nile, about 32 km to the TissIsat (locally known as the smoking Nile). The Blue Nile (Abay) is the longest river in the world at 6650 km. The source of the Blue Nile is in the North Western highlands of Ethiopia starting as the Felege Ghion, one of the four streams of paradise mentioned in Genesis (Genesis 2:13).  The river rises south of Lake Tana and flows from here into Sudan.  The river then flows through Sudan to Khartoum where the Blue Nile meets the White Nile, forming the Great Nile, which after flowing through Egypt finally discharges into the Mediterranean Sea.

We continue our journey towards Gondar, a drive that takes us through wide pastures country and hilly mountains.We stop and see how the oldest Ethiopian grain Teff is cultivated.
In the afternoon we will visit the imperial city of Gondar, located 2200 m above sea level. The city was founded in 1632 by the Emperor Fasilidas and for many decades was not only the capital, but also the centre of Ethiopian art, literature and science.
Gonder has another attraction, the Debre Berehan Selassie Church with one of the most beautiful murals in the country.

On the way to Lalibela a visit to the “godless” village of Awra Amba is on the itinerary.
The name means “Top of the Hill” in Amharic. The village is unique not only for its attitudes toward gender, religion, and education, but for the social security it provides its members in need. Women have equal rights as men and there is no distinction in divisions of labour between men and women. All people in the community have no religion as distinct from most communities in Ethiopia. They believe in hard work and being good to people. They keep their houses and their surroundings clean.

The miracle Lalibela is since 1978 not only a cultural heritage, but also the eighth wonder of the world!
At this place, formerly known as Roha, a new “African Jerusalem” was built in the midst of Christian Ethiopia surrounded by Islamic realms at 2500 m above sea level. The world-famous rock churches were built by King Lalibela in the late 12th and early 13th centuries. An architectural marvel completely carved out of the rock. Some churches are even monolithic. Today you visit the so-called “first group” of the eleven churches of Lalibela carved out of the raw rock:
BeteMedhanialem (World Savior Church), BeteMeskel (Cross Church), Bete Mariam, BeteDenegal (Church of the Virginity) and the twin church BeteSina (Church of the Sinai desert) and the adjoining, only for men accessible beet Golgota ( Church of Mount Golgota) also called the Bete Mikael with the Selassie Chapel.
In the afternoon we visit the remaining churches of Lalibela.  We visit the second group of churches comprising of the twin churches BeteGabreel and Bete Raphael (St. Gabriel and St. Raphael church), BeteMarquoreos (St. Markurios church), Bete Emanuel (Emanuels church) and Abba Libanos (Church of Saint Libano). We also visit what is considered the crown piece of all the churches, BeteGhiorghis (St Georges Church), which is located away from the two main groups.  This church was carved downwards out of solid rock in the form of a cross.

Our journey continues to Dessie. On the way we make a stop to  visit the Famous Hell Monasteries Nakotolab. We continue through an exceptional landscape with a stop at Hayke Lake if time permits.

We are approaching the end of this impressive trip. On the way back to Addis Ababa we visit an Oromo village.
Upon arrival in Addis Ababa, a day room is available for freshening up until 7 pm. In the evening we invite you to a farewell dinner with folklore.
We then accompany you to the airport.